Cape to Cape: A Voyage Around Botany Bay

Cape to Cape: A Voyage Around Botany Bay

The organisers of the International Coastal Symposium, recently held in Sydney, kindly invited me to run a field excursion around the shores of Botany Bay. I have conducted this tour several times for students, but this is the first for a professional group so I was not only a little nervous, but also quite excited by the opportunity to show visitors the delights and details of this extraordinary location.

I term the trip Cape to Cape. It extends from the vicinity of Cape Banks, a sandstone headland on the north side of the bay, to Cape Solander at the southern entrance. I take the liberty at the end of coming back to the city via North Cronulla beach. The voyage involves 9 stops of varying duration with me babbling along the way on the bus.

1. We start at La Perouse overlooking Bare Island with Cape Banks off to the east. I reminded myself to mention the long term monitoring and experimental work undertaken by Tony Underwood and his team from Sydney University at Cape Banks, but the main purpose of the stop was to introduce visitors to the geological history of this part of the Sydney Basin, my so-called seven step model. The overall setting of the bay and its history can be presented here including the early visit of French explorers and Aboriginal settlement at La Perouse.

2. One great advantage of this voyage is to witness the transformation of an open bay into a major transport hub and terminal. The Banksmeadow revetment is a magnificent structure that provides the necessary protection from storm waves. Angus Gordon and Ron Cox kindly offered me information on the engineering works here that commenced in the early 70s. It is great to talk about tribars and dolos with some degree of confidence as a result of their briefing.

3. Onto a new lookout constructed by the port authority as an outcome of the recent port expansion. This site offers visitors the chance to learn about the methods of construction using counterforts (another term I have acquired from my engineering friends) and the automated process of container handling. But it all ties together with a chance here to discuss the link between port protection and airport construction for the two runways of different age extending into the bay.

4. We journey around to Ramsgate and visit Lady Robinsons beach split into slices by groynes. Again the impact of bay dredging for airport and port works is apparent but I am also fascinated by its older pre-dredge history as described by Andrews in 1916. His paper tells the story of beach/foredune cut and fill going back to 1859 including the great storm of 1912. I cannot resist the temptation of showing his photos and then reflecting on the potential for storm/tsunami inundation as discussed in recent studies coordinated by the Sydney Coastal Councils Group and Sydney University. 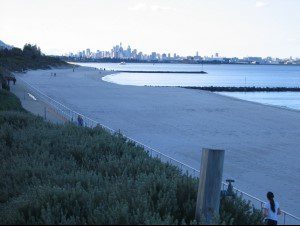 5. Sadly the mangrove walkway at the Cronulla Leagues club site is damaged to the extent that my liability insurance would be in jeopardy if we ventured through the mangroves into Woolaware Bay. But some visitors had not seen mangroves before so we had to have a meet and greet with Avicennia and the mosquitoes.

6. Then to the national park at Kurnell noting along the way the low-lying road (Captain Cook Drive) just above the upper mangrove level. The park with its museum and historic site offers much to talk about and see. This is where I go into detail on the first encounters with the local clan and the science of Banks and Solander.

7. The park has a great array of vegetation communities and walks but we cannot do them justice on this excursion. However, we can get to Cape Solander and visit the observation platform for migrating whales, and to really get to see the morphology of the cliffs and the sediment and structural characteristics of the 220 million year old Hawkesbury Sandstone.

8. The trip back to Cronulla involves a drive by of the sand dredge sites, the waste dumps and the new housing estates of the Kurnell dunefield. Pressures to reuse the degraded dune remnants for housing and recreation are increasing in this area.

9. I end the trip at Wanda and North Cronulla with further discussion of seawalls but this time more in the context of the 74-78 erosion event and post-storm recovery and new protection works around Bate Bay. 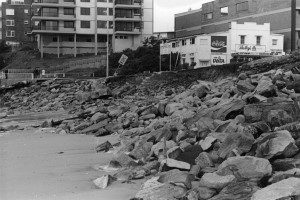 I look forward to doing this trip many more times as it captures so much of our coastal past, present and future.