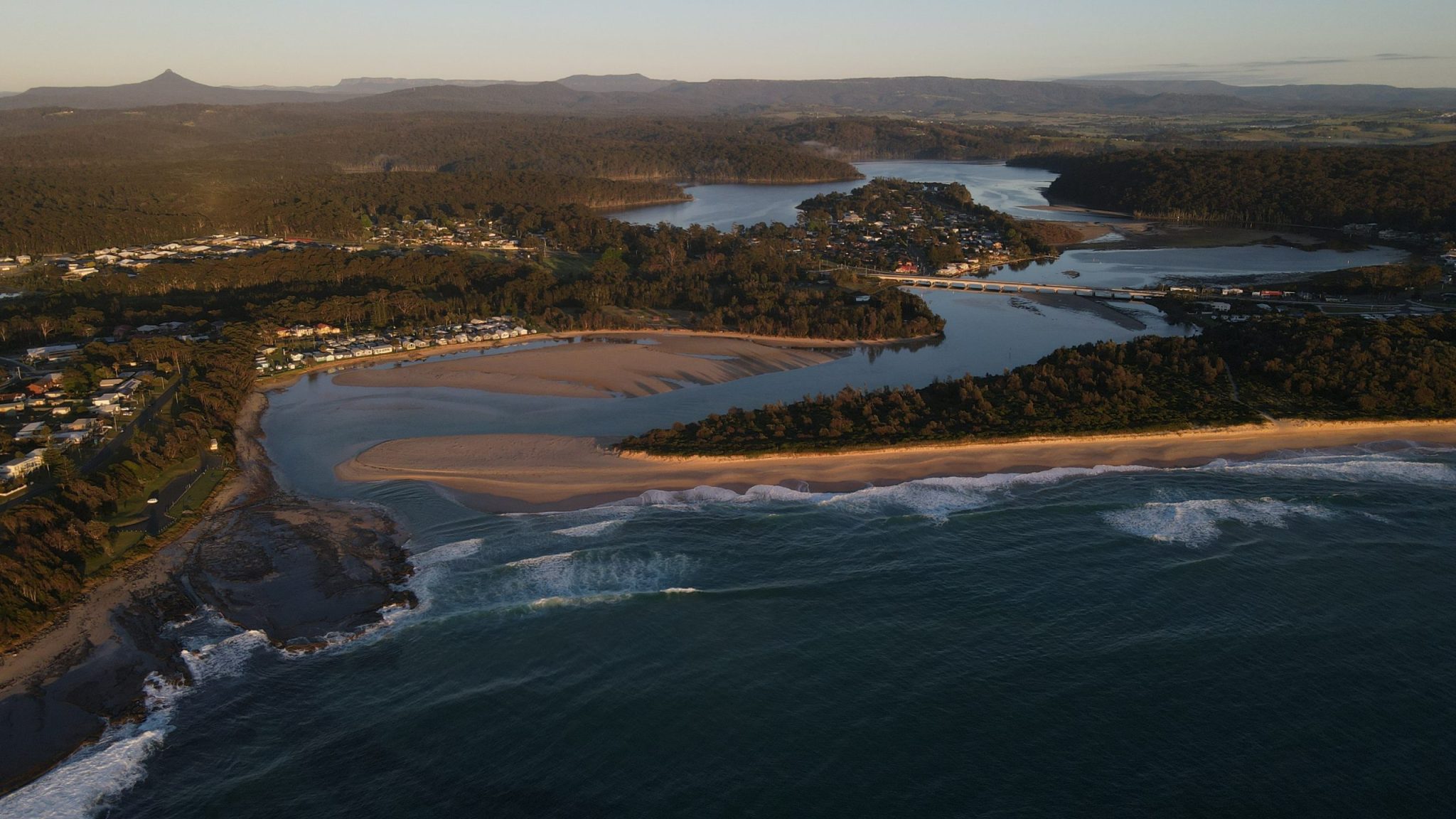 Over the past few years I have had the opportunity of participating in deliberations related to the health of certain Australian estuaries including coastal lakes. It has opened my eyes even more to an array of concerns that are captured by the word “lament” (an expression of sorrow, grief, or sad regret). Perhaps this is going too far as one could argue that current awareness of threats facing our estuaries is or potentially will trigger management actions preventing irreversible degradation of ecosystems and harm to the public.

My first encounter with estuary pollution was the result of swimming at Redleaf (now Murray Rose) Pool in Sydney Harbour in 1955 and emerging with a film of oil on my skin. At that time there was little control on bilge discharge from ships. On a boat trip up the Ord Estuary in Western Australia in 1971, the sight of masses of dead fish on the banks downstream from irrigated cotton fields alerted me to impacts of pesticides on this well flushed tidal system. These two occurrences are a personal reminder that estuary pollution is not new. However, across urban Australia with increasing populations, as well as coastal areas that receive discharge from agricultural lands, our estuaries remain under pressure from human activity.

In 2014, Eric Wolanski edited a collection of papers in a book titled “Estuaries of Australia in 2050 and beyond” (Springer, New York). We are all indebted to Eric for his long-standing commitment to estuaries. He dedicated the book to his grandson with a most moving statement: “I hope that SOME (my emphasis) will remain healthy for him to entrust to his children”. In the foreword it is noted that “In Australia, as anywhere else in the world, the coastal zone and its estuaries, large and small, are amongst the most endangered areas. Pollution, eutrophication, urbanisation, land reclamation, dams, irrigation, over-fishing, and exploitation continuously threaten the future of some estuaries, which bear the full pressure of these developments”. The former Prime Minister, Malcolm Fraser, in the Prologue recognises how the book offers science-based solutions to achieve ecologically sustainable development. He made the highly pointed statement that “This book is especially important because both major political parties have virtually adopted a policy of ‘little Australia’, probably as a means of avoiding environmental and developmental difficulties and the investment that would be needed for both”. How prescient in 2022!

What we are now experiencing is a further continuation of those pressures identified by Eric and his colleagues with varying attempts to either reduce adverse impacts (while possibly creating new ones), or allowing a perpetuation of uncoordinated actions by governments, commercial interests and communities that lead to cumulative degradation of waterway health. In this context estuary health embraces both ecological and public health conditions (to which can be added the stability of shorelines and entrances). Estuaries and coastal lakes are to a large degree sinks for pollutants with varying degrees of seaward flushing into marine waters. It is sources that need mitigating and that now includes those resulting from closure of power stations, plastics, pharmaceuticals, and products that come off our roads including trye wear.

On the positive side there have been steps taken through legislation and actions of agencies such as state EPAs and water utilities to mitigate pollution inputs from identified sources. Effort has gone into assessing nutrient and sediment flows into critical coast and marine habitats such as the Great Barrier Reef. Investment in stormwater and sewer infrastructure is on-going in many urban areas. For years I have admired the Healthy Waterways program in SEQ. Yet the cry for more investment and coordinated management remains, especially in a world of new pollutant threats and effects of climate change. Malcolm Fraser’s thoughts on ‘little Australia” resonate.

My recent encounters with human intervention and impacts on our estuaries have highlighted the urgency to take a more integrated approach involving governance structures that embody sustainable funding and an appreciation of the need to manage consequences. The permanent opening of Lake Illawarra following recommendations of a committee I chaired in 2002 reminds me of what happened earlier in WA with the Dawesville Cut. Here an artificial channel was dug allowing the sea to interchange its waters with the Peel- Harvey Estuary to overcome a period of eutrophication. The late Ernest Hodgkin provided the science base for major works including excavation, training walls and a sand-bypassing system (1990-94). In the case of Lake Illawarra its tendency for a sand bar to block tidal exchange during drought led lake levels to fall below sea level exposing decaying seagrasses and huge loss of amenity and economic use of lake waters. We recommended dredging combined with training walls and placement of dredged sand on Warilla Beach. The aim was to facilitate inflow of marine waters and a somewhat more constant lake level. However, such actions have ecological and engineering consequences; for instance, the very long-term future scouring of entrance channels before they achieve new hydraulically stable regimes as shown in the work of Gordon and Nielsen in NSW. As with the Peel-Harvey, it is expected that new habitats will evolve as the tidal regime changes (and sea levels continue to rise).

Further encounters in human-modified estuaries outside of NSW has alerted me to the national scale of estuary health problems. As part of the Wentworth Group team, I became involved in assessing the health of the Coorong-Lower Lakes-Murray Mouth (CLLMM) system. This work is summarised in our paper in River Research and Applications (2020, v. 36, 656-667). Dredging of the river mouth is now necessitated due to over-allocation of river flows in the catchment.  Ecological issues for the area have been studied by many including the indefatigable David Paton. Recent legislation in South Australia establishing an Environmental Trust to monitor and report on the health of the CLLMM is a good step and I look forward to learning more from this group. The sorry state of the Gippsland Lakes continues to attract community attention (see Bairnsdale Advertiser 11 May). Here a triple whammy exists: a reduction of freshwater inflows, deeper dredging of the mouth at Lakes Entrance, and continued nutrient influx setting off algal blooms. Again I watch with concern how governments respond to further environmental degradation given both CLLMM and Gippsland have valued Ramsar sires. (Note: I previously blogged on these systems Nos 87, 114, 168).

The former NSW Health Rivers Commission led by Peter Crawford did a marvellous job 20 or so years ago assessing estuary health including coastal lakes. I enjoyed meeting with the team from time to time learning a lot about institutional issues. The NSW Coastal Council is soon to complete a task on coordinated management of NSW estuaries. This is not the place to go into details except to note public issues frequently erupt. An example is an article in Merimbula News on 9 May “Planning is not enough: Eden community call for urgent action on Lake Curalo management”. As an ICOLL in a town it is subject to catchment sediment and stormwater inflow “making it unhealthy and less usable”. It is a cry for help. I am reminded that at the NSW Coastal Conference in 2018 held nearby at Merimbula, Will Glamore guided us to produce the “Merimbula Manifesto” with seven initiatives designed to overcome such community angst.

My current role in supporting assessment of waterway health for Greater Sydney Harbour (see Blog 200) further alerts me to urgency in addressing estuary health issues seen in many places around the world. In the UK, the House of Commons Environmental Audit Committee recently reported on water health in rivers flowing into the sea. This makes for very sobering reading (The Guardian 13 January). What I saw in New York Times on 9 May about coal ash pollution in Mobile Delta (Alabama) is a sign of what can happen here without strong compliance regimes. No wonder we may lament.